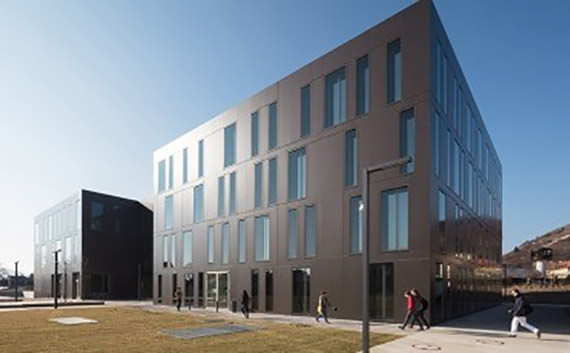 The new constructed university building, opened in March 2017, fulfils a dual function as an office and an educational institution containing auditoriums, class-/seminar rooms and laboratories of various sizes next to the administrative office areas. It is equipped with a reversible ground source heat pump providing warm and cold water for room heating and cooling, a compression chiller as a backup system for cooling as well as several air handling units and a photovoltaic system on the buildings’ roof. The useful energy is provided by space heating / cooling systems such as thermo-activated building components and floor heating as well as via the air ventilation units. The operation of all systems is supported by a building management system. The building is owned by the federal state of Lower Austria and operated by an external facility management company.

The quality management service started immediately after the building was handed over from the constructor to the building owner. The main objective was to identify deficiencies relating to the BMS and energy efficiency improvement potentials from the very beginning, in order to meet the energy performance targets and to secure a good indoor environment. It is therefore an addition to the already implemented energy monitoring infrastructure.

The service comprised four performance tests carried out within the first year of operation including the setup of an online platform which enables the facility management team to constantly supervise the operation of the systems. Additionally, a user survey was conducted. The results of the individual performance tests were reported to the client. Any anomalies and deficiencies found have been passed on to the BMS contractor. As a consequence, these faults could be corrected within the warranty period.

The performance tests were based on the execution planning and the parameters set during the commissioning by the BMS installer. The operation data was handed over regularly once a week by the BMS. The online-dashboard was updated automatically. In agreement with the Facilities Management team, performance checks for a defined period were conducted. Identified faults were evaluated based on the actual operation data and instructions issued in order to fix deficiencies.

Why commissioning:
A gap between the predicted building performance and the actual is known from many projects. The technical monitoring was contracted to check the performance of the technical systems and to identify deficiencies during the early operation phase.

Additional potentials to improve the thermal comfort was identified, such as: