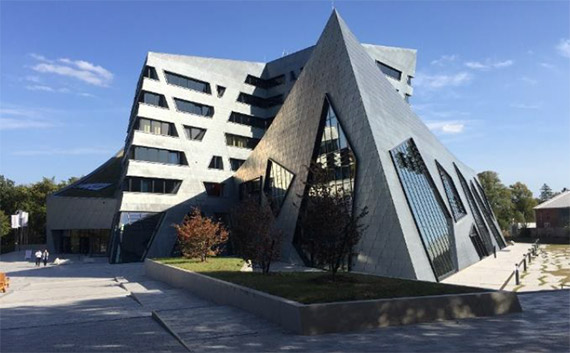 The building was designed by architect Daniel Libeskind with the intent of disrupting the linear and firm structure of the former military barracks, while creating a symbol for the future. It was formally opened in 2007 after a five-year construction phase, completing an indoor area of 17.700 m². This includes a multifunctional hall which can seat up to 1100 guests, not only for lectures but also for concerts, plays and other events. The university building also houses a cafeteria, research facilities, classrooms and offices. 100% of its energy needs are provided by renewable energy. It has a primary energy demand of 50% compared to the EnEV reference building.

At Leuphana, TMonP and Cx was applied starting in the late construction phase. The services had been divided into three phases:

During the start-up phase, various inspections were arranged to measure and test the functionality of the air-conditioning, cooling and heating systems. Additionally, on-site visits were arranged to determine the quality of execution in reference to the configuration of hydraulics for the air-conditioning, cooling and heating systems. During the trial operation – carried out before the official hand-over – the data of the building automation was recorded for two weeks. Inspections are now taking place in semi-annual cycles to examine the performance in the first years of operation and to evaluate the weather-related system status.

In this project it was crucial to implement the functional performance test before official approval to identify energy saving potential right from the beginning.

In sum 134 issues have been detected, which would have influenced the building performance negatively in the early operational phase.

In detail, 7 issues can be allocated to cooling systems, 69 to heating systems and 58 to the air handling units.

This leads to estimated energy savings of 81 000 kWh per year or 31 080 kg of CO2. The static payback period is less than two years. In the first two years the operational performance will be monitored.